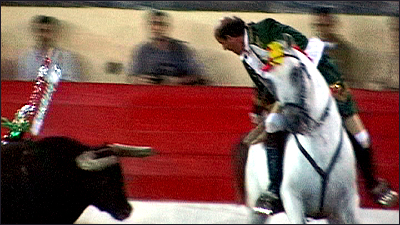 Minotaur, is a work-in-progress documentary about human violence seen through the evolution of the ritual that lead to modern day bullfighting. The theme is analyzed from the inner conflict that surrounds the Portuguese bullfighting, which differs from the Spanish in that it is illegal to kill the bull in the ring and that the fighter rides on horseback. Portuguese bullfighting is made-up of many contradictions that have emerged from a less violent approach to the art form and the ambivalent influence of the roman church. An original cultural phenomenon that features metaphoric events like the "pega" - where a group of men literally tackle the bull by the horns - and that features the Lusitano horse, known for its courage and elegance, as a central figure in the spectacle.

This film does not have moral pretensions. The issue of right versus wrong is to ultimately be decided by the viewer. Minotaur is an exploration of culture, identity, history, ritual, religion, mythology and ultimately violence as it relates to human nature. As Bruno has done with some of his other films, he revisits the topic in separate segments shoot through long periods of time, therefore developing the film as he goes and letting a free-format shooting lead to a long period of editing where the film will emerge through a kaleidoscopic juxtaposition.